The NASA-wide Apollo 11 special event operations commemorating the 50th anniversary of Apollo 11 are over.  We operated as N4A during the period 16 – 24 July, 2019.  QSL cards will be available soon.  Check QRZ.COM NN4SA for QSL information.

You can check your contacts at nota.ka0s.net

Note that another Huntsville, AL amateur radio club was  operating the special event as W4A so make sure your QSL requests are made appropriately.

The MSFC Amateur Radio Club has 3 regular meetings each month:

1st Thursday from 4:30 – 6:00 pm is the regular business meeting followed by a program.

3rd Thursday from 4:30 – 6:00 pm is the work/play session where do odd jobs around the station and/or get on the air.

4th Thursday from 11:30 – 12:30 pm is the lunchtime business meeting and program.  The business meeting is usually abbreviated due to the shorter time available.  We encourage you to bring your lunch if you like.

All meetings are held at the club station, MSFC building 4622.  It is located just west of the south end of Rideout road.  Just look for the 100 foot tower.

If you have questions about the club e-mail us at msfc-nn4sa@mail.nasa.gov

Amateur Radio “Field Day” June 23 and 24 Demonstrates Science, Skill, and Service
22 June 2018
Members of the Marshall Space Flight Center Amateur Radio Club (MARC) will be participating in the national Amateur Radio Field Day exercise, June 23–24 at the Von Braun Astronomical Society Observatory on Monte Sano Mountain. Club members will construct 2 temporary stations on the observatory grounds: one for voice communications and the second for Morse code and digital modes. There will also be a satellite station to communicate through one of the amateur radio satellites currently operating in earth orbit. The event is open to the public. People are encouraged to come out and see what club members are doing, find out more about amateur radio, and even get on the air.
Since 1933, ham radio operators across North America have established temporary ham radio stations in public locations during Field Day to showcase the science and skill of Amateur Radio. For more than 100 years, Amateur Radio — sometimes called ham radio — has allowed people from all walks of life to experiment with electronics and communications techniques, as well as provide a free public service to their communities during a disaster or emergency, all without needing a cell phone or the Internet. Field Day demonstrates ham radio’s ability to work reliably under any conditions from almost any location and create an independent communications network. More than 35,000 people from thousands of locations participated in Field Day in 2017.
“It’s easy for anyone to pick up a computer or smartphone, connect to the Internet and communicate, with no knowledge of how the devices function or connect to each other,” said David Isgur, communications manager for the American Radio Relay League, the national association for Amateur Radio. “But if there’s an interruption of service or you’re out of range of a cell tower, you have no way to communicate. Ham radio functions completely independent of the Internet or cell phone infrastructure, can interface with tablets or smartphones, and can be set up almost anywhere in minutes. That’s the beauty of Amateur Radio during a communications outage.”
“Hams can literally throw a wire in a tree for an antenna, connect it to a battery-powered transmitter and communicate halfway around the world,” Isgur added. “Hams do this by using a layer of Earth’s atmosphere as a sort of mirror for radio waves. In today’s electronic do-it-yourself (DIY) environment, ham radio remains one of the best ways for people to learn about electronics, physics, meteorology, and numerous other scientific disciplines, and is a huge asset to any community during disasters or emergencies if the standard communication infrastructure goes down.”
Anyone may become a licensed Amateur Radio operator. There are more than 725,000 licensed hams in the United States, as young as 9 and as old as 100. And with clubs such as MARC, it’s easy for anybody to get involved right here in North Alabama.
For more information about Field Day or Amateur Radio, contact Don Hediger (N4MSN) MARC President 256-544-1692 or visit http://www.arrl.org/what-is-ham-radio.

2018 is a big year for NASA anniversaries and the amateur radio clubs at NASA centers would like for you to help us celebrate.  It will be 60 years since NASA was created, 50 years since NASA orbited the first man around the moon, and 20 years since the first elements of the International Space Station (ISS) were launched into low-Earth orbit.

The amateur radio club stations at the various NASA centers and facilities plan to be on the air with special event operations to celebrate these monumental achievements, as well as current milestones. Some clubs will be offering commemorative QSL cards and a special certificate will be available indicating how many NASA club stations you worked on various bands and modes. We plan to have a web-based system for you to check your points total and download a printable certificate at the end of the event in December 2018.  Points will be awarded for each center worked on each band and mode (phone, CW, digital, and “space” modes). The event will run from December 11, 2017 through December 27, 2018 with the following key dates:

Note that there will be other special event operations by the various centers commemorating and celebrating specific events, but those listed above will include participation from most of the clubs. All operating modes are fair game including “space” modes such as satellites, meteor scatter, EME, ISS APRS, etc. We hope to be on the air for casual contacts and contests as well. All contacts with NASA club stations will count toward your total. QSL cards can be requested from each club you work and details will be on the individual QRZ.COM pages for each club callsign.

Here is a list of the participating centers and facilities with designators and callsigns for each:

Check back for direction to further details of the event and information on how to check your contacts and obtain a certificate at the end of the event.

Please help us celebrate this significant anniversary year for your space agency.  We look forward to working you!

The participating amateur radio clubs, and the NASA On The Air (NOTA) event activities are independent of, and not officially sponsored by NASA.

The Marshall Space Flight Center ARC, NN4SA, will be participating in field day on June 24th and 25th from the Werner von Braun Planetarium on Monte Sano.

Apollo 16 was the first mission to visit the lunar highlands.  John Young and Charles Duke spent 71 hours on the surface while Ken Mattingly remained in the Command Module in lunar orbit.  There were 3 EVAs each using the Lunar Rover developed at MSFC.  More details on the mission are available here. 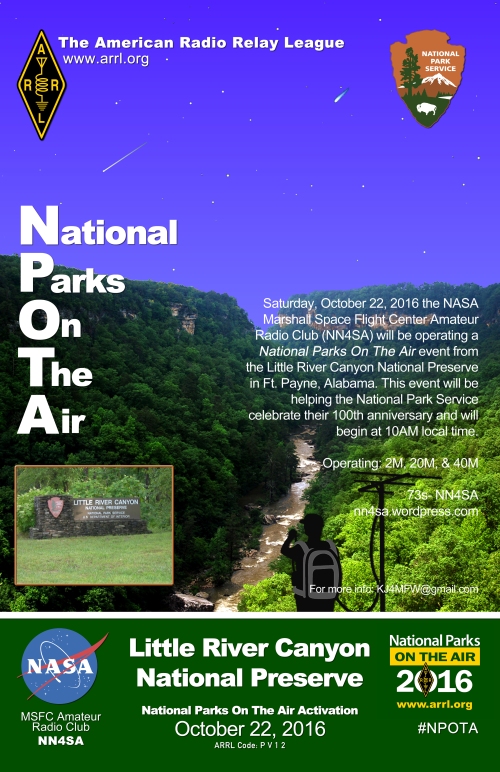 NN4SA will be activating Little River Canyon National Preserve as part of ARRL’s National Parks On The Air (NPOTA) initiative. This event will occur on October 22 and begin at 10 AM. The day of activities will include NPOTA activation, much fellowship, good food, and lots of fun. We would like to invite you and your team to join us. All NN4SA operators will receive an event poster, and an “activator” certificate (signed by the president of the MSFC ARC). Mostly, we hope it’s a fun event. On top of that, we will be activating Little River Canyon National Preserve! How cool is that! So, please come have food and fun.